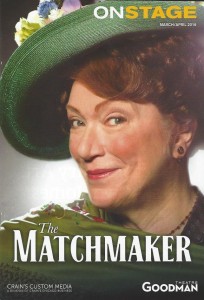 It is just what it always has been, a scrambled, scattered, flyaway farce, full of loose ends, moralizing asides and fascinating people. Its happy endings sprout right down to the footlights, where they speak up, wishing you the same. Enticingly adorned and enjoyably staged, it has the adaptable shape of a beanbag, a pixilated warmth of heart, and aside from being endearing nonsense, it is a lucidly loony play.

Better words could not be found to sum up the current production of Thornton Wilder’s The Matchmaker, than those of the Chicago Tribune’s great Claudia Cassidy which described The Matchmaker’s first visit to Chicago in March of 1957 at the Blackstone Theatre.

So classic a farce, Wilder’s play could he used as a textbook introduction to comedy itself:

The Goodman Theatre has assembled a first rate company to present Wilder’s infrequently performed comedy. Director Henry Wishcamper knows how to move a play along, without sacrificing intelligibility or a sense of ease. In addition, he allows the play to be itself, in all its quirkiness, all the while maintaining a sense of probability about all of the characters and their adventures. (His staging of the dining scene should be seen by all young directors who are baffled as to how to motivate diners to leave their seats.) The actors must enjoy working with him as well, since the production features some excellent performances.

In most Wilder plays at least one character talks to the audience. Wilder talk is unusual. Not monologue, not soliloquy, not narration, the character’s talk probably resembles Wilder’s own unique way of talking. Tyrone Guthrie, the director of the first production of The Matchmaker, describes, the Wilder conversational style:

Wilder is learned, but no pedant. I have never met anyone with so encyclopedic a knowledge of so wide a range of topics. Yet he carries this learning lightly and imparts it – – the important with the trivial, the commonplace with the exceedingly bizarre – in a style and with a gusto which is all his own. 3

Actors shine when they succeed in finding the key to one of their Wilder “arias.”

Postell Pringle is one.* If you have only seen him as part of a Q Brothers production, then his Cornelius Hackl will come as a revelation to you. He is a consummate actor. Mr. Pringle finds layer upon layer in this seemingly flat character, and communicates the stock clerk’s evolution with great finesse. His “Isn’t the world full of wonderful things?’ aria is a high point of the production.

But any production of The Matchmaker rises or falls on the back of the actress playing the matchmaker herself, Dolly Gallagher Levi. Any musings about how Ruth Gordon might have been in the role disappear as Kristine Nielsen quietly and permanently takes control of the stage. Like her male counterpart, Nathan Lane, Ms. Nielsen is both a personality and a talent. Her plastic face, devilish eyes, and ever-moving fingers constitute an irresistible force of nature. She can suddenly move her voice from upper to lower range and instantly boost the stakes of any scene. Her great aria, “Ephraim Levi I’m going to get married again.’ is not just the climax of the play, but also a glorious capstone to a great performance. Claudia Cassidy’s appraisal of Ruth Gordan fits Ms. Nielsen to a tee:

Superbly in command. Here is a marvelous high comedy performance which scorns no trick of low comedy style. This Mrs. Levi is a glittering schemer, a bewitching fraud, and an admirably honest woman. She makes the audience jump through hoops and like it.

But actors don’t need arias to shine in this production. Elizabeth Ledo’s Irene Malloy is a fireplug of energy and determination. Barnaby Tucker (originally played by Robert Morse) when played by Behzad Dabu is a Zoloft-free ADDer, the perfect counterpart to Pringle’s measured Hackl. And Ron Rains, a man who takes throw-away roles and polishes them into gems, does the same with the waiter. He can hold an audience rapt simply preparing to bow a rip saw intermezzo tune.

Thornton Wilder had a unique fondness for Chicago. “No city he loved more than he loved Chicago…He made Chicago his city….’The years at [The University of] Chicago] were among the happiest in my life’.” 4 Neil Patel’s lovely multi-purpose set seems to pay homage to Chicago by framing the action with elevated tracks, an architectural feature common to both the city Wilder loved and the city in which his play is set, New York.

*Mr. Pringle was my student at Bates College.