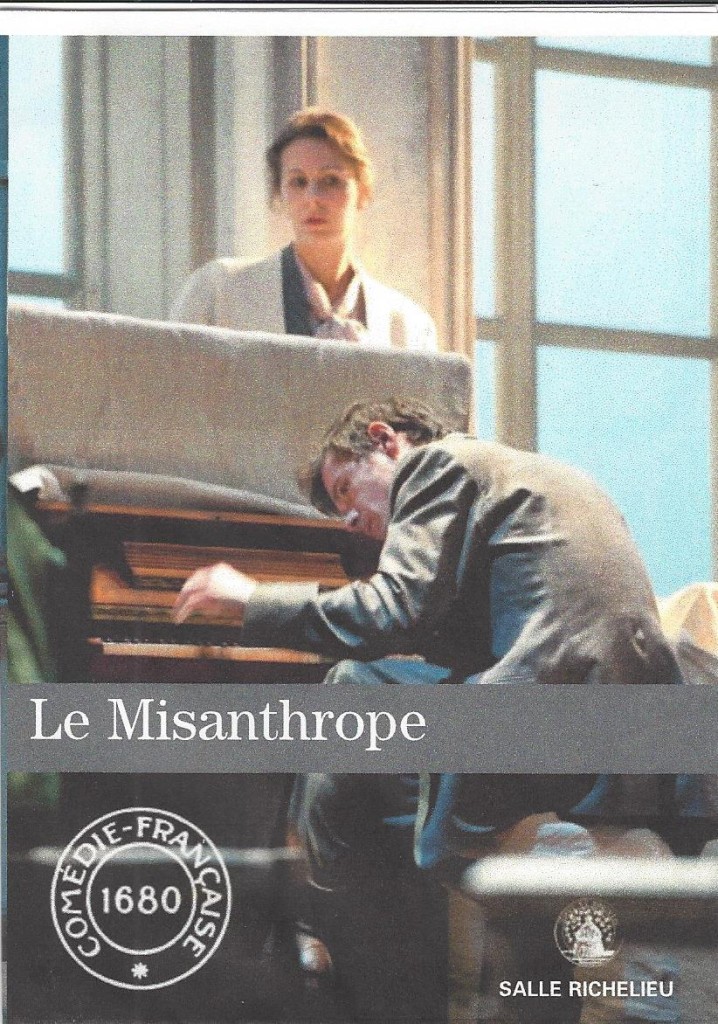 “Moliere’s protagonists are not just eccentrics, they are madmen. They are possessed. They have an idea…and that idea is fever in the blood.”

No clearer example of Eric Bentley’s famous description can be found than in Clement Hervieu-Leger’s overwhelming production of Moliere’s 1666 “comedy”, The Misanthrope, or the Splenetic Lovers.”

Mr. Hervieu-Leger has fashioned a comedy in the Chekhovian sense of the word. In fact, Eric Ruf’s scenery, Caroline de Vivaise’s costumes, and Bertrand Couderc’s lighting could serve a production of The Cherry Orchard just as well. The entire production seeks Moliere through the comic sensibility of a barren Chekhovian estate, plaster crackled and furniture under dust covers. The place echoes our hero’s soul.

As the director’s notes suggest, this Misanthrope, this Alceste, discovers that his pain has led him into overwhelming psychological depression. The director looked to Plato. In the Phaedo, the philosopher notes that a person, in this case our hero Alceste, becomes misanthropic through a series of disappointments by those he had trusted. By the time the curtain rises in the Richelieu, the fifty year old Alceste has clearly been through the proverbial wringer. He believes all people eventually turn out bad, especially his best friend Philinte (Eric Genovese) and his would-be girlfriend, the twenty year old widow, Celimene (Adeline d’Hermy). Everyone seems to have let Alceste down. He can no longer trust anyone, perhaps not even himself.

Loic Corbery gives a bravura performance of Alceste. He resembles very much Robin Williams playing Tommy Wilhelm in Fielder Cook’s 1986 film of Saul Bellow’s Seize the Day. Mr. Corbery shares Mr. Williams’ considerable skill in walking the line along manic despair and the abyss of roaring “black bile”, known today as manic depression. Like Tommy Wilhelm, and like Robin Williams, Corbery’s Alceste is tired of being himself.

The production spins around the dynamic triad of Corbery’s Alceste, Genovese’s Philinte, and d’Hermy’s Celimene. Throughout the play’s three – hour duration the audience sat in rapt attention, lest a sudden movement or sound tip the precarious balance, sending a soul to his doom. At the end, the audience greeted the uniformly beautiful and handsome and talented cast with eight curtain calls, signaling a clear recognition that they had witnessed a remarkable and significant interpretation of a great, great play.