SMOKEFALL: EVEN BETTER THE SECOND TIME 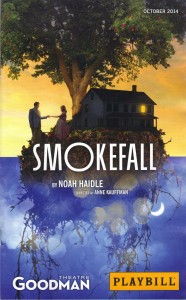 I returned to Smokefall at the Goodman Theatre. Noah Haidle’s play deserves a second viewing.

The performance  confirmed my initial reaction made last fall: Smokefall by Noah Haidle: An American Classic. The play is organized non-chronologically, and the thematic double casting of actors caused my focus at that time to be almost exclusively on the plot, what was happening. This time I could look at how the play was constructed, how the design and direction underscored the play’s presentation of time, space, and theme.

At intermission, in the lobby, a patron asked loudly, “Could someone please tell me what I just saw?”

I won’t venture to tell him what he saw, (often audiences see what they are looking for, and if they don’t find it, they may conclude that there was nothing there), but I will offer an overview to what I saw.

I believe the title is an offer by the playwright to explore his play as a response to T.S. Eliot’s great poem Burnt Norton, the source of the play’s title. Mr. Haidle’s play, like Eliot’s Four Quartets, is organized around recurring images, phrases, and actions. And as with Burnt Norton, Smokefall has a literal, a moral, and a mystical meaning.

After the cathedral bells strike seven, Smokefall begins to tell the story of a family and that family’s home. After travelling the world (and loving on six continents) the Colonel and his wife Lenore settled in Grand Rapids, Michigan, bought a split level ranch in the 1950s and started a family. They had one daughter, Violet, the apple of their eyes. Violet married her suitor, Daniel, and the newlyweds moved in with Violet’s parents. The couple had a daughter, named Beauty, because she was the most beautiful thing her father had ever seen.

Over time, Daniel and Violet’s love grew routine, arguments arose, and financial pressures mounted. Lenore died, the colonel developed dementia, and the apple tree in the back yard began to rot until it had to be cut down.

Violet became pregnant with twins. She sang to them every day, the colonel advised them every day about such things as the certainity of the existence of God and the non-importance of one’s credit rating, and their father, overwhelmed by the new financial responsibilities, didn’t know what to do. Beauty stopped talking to lessen the noise level in the home, and stopped eating normal food to ease the financial strain on her father.

On Violet and Daniel’s anniversary, Daniel left home never to return. The family discovered this in time; Daniel had only hinted to Beauty of his plan.

Alone, Violet gave birth to her twins, Samuel and John. Samuel died in childbirth. Violet’s world crashed down upon her – a dead child, no husband, a father in need of care, a daughter who decided to leave home to find her missing father, and a newborn infant.

Act Two introduces an aged John, the spitting image of his grandfather, the colonel, the surviving twin, living alone in the same Grand Rapids home. It is his birthday. His only son, Samuel, named after his deceased uncle, has flown in to visit him, but John rebuffs him again, as he has all his life. John’s life, and his family history, have taught him that intimate, loving relationships only end up hurting you, so who needs them. So Samuel leaves for the airport.

The image of Violet, John’s mother, haunts the home: as a young mother she serenades her young infant John in her arms, and as a teenager she swoons over her future husband Daniel as he arrives at the door to offer love. Lenore’s voice is still in the home , heard from off stage. John’s refusal to love is contrasted with his mother’s refusal to do anything but love.

And the apple tree (the family tree of lineage, the tree of the garden, the tree upon which Christ died), planted at John’s birth, now towers about the house, in the place of the one cut down.

On the occasion of John’s birthday, (a coincidence or Providence?) Beauty returns from her seventy-four year search for her father. She has visited six continents looking for him, (like her grandfather,  loving on each one), but found him just a few streets away in a Grand Rapids nursing home. She has brought her father home, or what’s left of her father – his skeleton. John and his long-lost sister Beauty decide to bury their father in the back yard in the shade of the apple tree.

Samuel returns, refusing to be rebuffed by his father, and insisting on love any way he can share it. He meets his aunt and the three of them leave for the back yard to plant Daniel’s bones. Alone in the home is Violet, repeating her life’s memorable moments of love.
Church bells resound.

The setting is a home, but the scene is also the universe. Kevin Depinet’s thrilling setting shows that every home exists forever in the never-changing universe, elegantly conveyed by a chandelier of a galaxy and hanging apple – planets.

Characters never really leave when they leave. Their essence – either genetic or God-given or both – always remains, passed on through the family tree to future generations. Ana Kuzmanic’s subtle use of repetitive costume pieces visualizes the passing of hereditary traits.

And love never leaves the home or the universe. Violet, the keeper of the home, (probably as was Lenore), is also the repository of the family’s love and hope and faith. The heart-breaking repetitive actions and poses given to her by director Anne Kauffman (and played so wonderfully by actress Katherine Keberlein)  insist that love never dies. We can see love fill her home and rejuvenate her family tree. She is the source of love – the Theotokos. Her love is so strong that it makes her husband’s abandonment seem almost an act of love; he seems to be leaving for the good of his family.

The love of Violet and Daniel find embodiment in the Del Viking’s song “Come Go with Me”. They dance the eternal rhythms of life, the universal tropes of love and relationships. Life, and this play, consists of coming and going.

Well, love, love ya darlin’, come and go with me.
Come with me, ‘way beyond the sea.
I need you, darlin’, so come go with me.

Yes, I need you, yes, I really need you.
Please say you’ll never leave me.
Well, say, you never, yes, you really never,
(You never give me a chance.)
Love, love me darlin’, come and go with me
Please don’t send me ‘way beyond the sea.
I need you, darlin’, so come go with me.
Come on go with me.

Coming and going, for whatever reason, exist in a universe of love. As with the Del Viking’s song, life is repetition, double helix loops within loops, timeless.

Mr. Haidle’s play, director Anne Kauffmann, and the team of designers have visualized a cosmic sense of time which embraces and enfolds the common time of everyday life. It is the same time critic Morris Weitz finds in Burnt Norton “the immanence theory of time is worked out fully in poetic terms… the sense of the past and the future in the present…The present and the past are perhaps already part of the future but the future is determined by the past.”1

Georgios I. Mantzaridis elaborates on this concept of time:

We know today that time is polymorphic, as is the world with which it is linked and coexists. The conception of an earlier age, of time as something uniform, is belied not only by the personal experience of each and every one of us, and our resultant convictions, but also by the findings of modern science…Time, then, like space, does not only affect the things and forces of this world; it is also influenced by them.2

The audience at Smokefall is invited to see this time unfold. We see the mystery of time unveiled before our very eyes. We see past and future influencing the present, and present influencing both future and past. Only great theater artists can accomplish this.

The director and designers illustrate Mantzaradis point: “Time is usually divided into three parts: the past, the present and the future. But these three facets of time do not, in the final analysis, have any real substance.” 3 In Smokefall, as in life, only love has substance.

When Violet’s world comes crashing down, the house beams crash into a resultant cruciform, while the fruit of a new apple tree appears all around. The cross literally divides time into BC and AD, Act One and Act two. The base of the cross find its root in Lenore’s grave and Violet is next seen at the foot of the cross, in Mary-blue robe, holding her infant son John in imitation of the icon of the Virgin of Lovingkindness, Christ as both Infant, and as Pieta. Kairos time. Through love, the tree of death has become the tree of life. At this moment we understand Violet’s name. She was named Violet because she was destined to embody the liturgical color of both the Nativity and the Feast of the Cross.

Finally in Smokefall, “everyday life is seen as synthesis and transcendence of past and future, so too love emerges as synthesis and transcendence of man’s faith and hope in God. Love, as a virtue of time present, is the bridge over which everything that the future has in store can be conveyed, so that it can then be placed in the past. Finally, love, like the present, is all that man has at his disposal as long as he lives in the world. Not only this, but it is also the only thing that will continue to exist when the world and time have come to an end.”5

The world of Smokefall, like the world of Burnt Norton,   seems ultimately a Christian world. As Father Stephen Freeman writes,

The shape of the universe in this classical Christian understanding encompasses a world in which everything is capable of referring beyond itself and outside of itself. Everything becomes a doorway and a window, a means of participation in the depths of reality…the truth of everything is to be found precisely in its referential character and in that to which it refers.6

Playwright Noah Haidle has drawn the outline of a profound contemporary icon. Director Anne Kauffmann, and designers Kevin Depinet, Ana Kuzmanic, David Weiner, and Lindsay Jones have filled in the outline, and actors Catherine Combs, Anne Fogarty, Katherine Keberlein, Guy Massey, Mike Nussbaum, and Eric Slater have breathed life into it. In the resultant living icon, the audience is invited to see

The world and all that is in it is given to us as icon, not because it has no value in itself, but because the value it has in itself is the gift of God – and this is seen in its iconicity. Another person can be my entry into Paradise, or just as clearly my entry into Hades (and both in a far deeper sense than the merely moral). Love alone reveals things for what they are and transforms them into what they were always intended to be. Love alone reveals the true shape of the universe.7