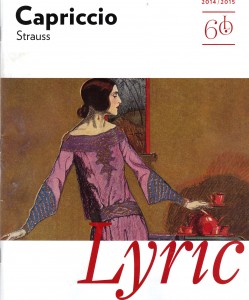 First, it could showcase, better than almost any other opera, the voice and acting of the Lyric’s creative consultant, Renee Fleming, and second, because of the opera’s subject: it is an opera about opera. (Historically audiences like these kinds of stories – movies about movies, plays about plays. The hottest ticket in New York right now is Terrence McNally’s play about the theater, It’s Only a Play.)

Inside Mauro Pagano ‘s beautiful setting, Krauss and Strauss ask which is more important to opera, words or music. Despite the imaginative staging by directors John Cox and Peter McClintock, the answer is:

The truly most important element in any opera is demonstrated by its lack in the insufferable libretto produced by conductor Clemens Krauss. Aristotle noted that plot is the “soul” of drama. Krauss produced an anti-plot, a series of expressed opinions and clichés leading to a secret climatic decision.

Perhaps if Strauss had been able to have his friend Stefan Zweig write the libretto, as he had planned, the opera may have had the zest of the Stefan Zweig-inspired movie The Grand Budapest Hotel.