“C.S. Lewis on Stage”: The Fullness of Life 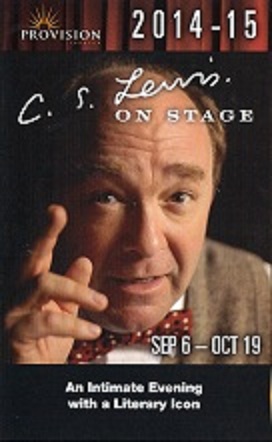 Why does a Cambridge University professor of Medieval and Renaissance literature continue to fascinate the world more than fifty years after his death? The London Times ranked C.S. Lewis eleventh on their list of “the 50 greatest British writers since 1945”. Plays and movies have been written about this long dead professor, and Lewis’ own works continue to be adapted to the stage and screen.

Chicagoans have a chance to gather firsthand information about Lewis and answer that question for themselves. The Provision Theater is presenting C.S. Lewis on Stage, “an intimate evening with a literary icon!”

In a recent blog post “Around the Corner” the wonderful Fr. Stephen Freeman focuses on this play’s main character and his remarkable ability to reveal the world to be fuller than we had known or expected. Lewis saw things often overlooked, and by pointing them out, allowed his hearers to experience “the fullness of God.” Father Freeman continues, “In the apprehension of fullness, the self recedes, even to the point of disappearance, while the fullness fills everything.”

Father Freeman knows that the language of fullness is language associated with the presence of the Holy Spirit; the liturgy acknowledges the Holy Spirit as filling all things.
C.S. Lewis offers the secular world a glimpse of a non-materialistic reality, the Kingdom of God, living within our own world. Again Father Freeman: “The Orthodox tradition points to this deeper reality as a quality to be found everywhere (the fullness is ‘everywhere present’). It is not a quality, or a reality that forces itself on our awareness. Instead, it is a quality of which we are normally not aware – and we are not aware because the lacking is within us.”

Lewis’ continuing popularity is due, I believe, to his unique way of allowing his audiences brief tastes of Kingdom life in abundance, in fullness.

The current production of “C.S. Lewis on Stage” at the Provision Theater provides a wonderful example of Lewis’ ability to unlock more of our world than we knew existed. The audience arrives at Lewis’ Oxford home, “The Kilns”. When Lewis enters his room he treats us as if we were coach tourists just stopping by on our way to Cambridge, Stratford, the Cotswolds, or Warwick Castle. He interrupts the letter he is writing to an American fan named Mary to make us a pot of tea. He then begins to fill us in on what has been happening in his life and puts each tidbit in the context of his life.

Lewis is the perfect host – charming, witty, and entertaining. In the course of our stay Lewis innocently manages to touch on profound, universal, but intimately personal matters we pilgrims have knowingly or unknowingly brought with us. His talk and stories begin to fill deep reservoirs in the audience’s souls. This Lewis is not a Prosperity Gospel Preacher offering a happiness which does not last, cannot satisfy, and is often illusory. The Lewis we meet begins to open our dark eyes to a kingdom of light, and to fill our empty souls with a fullness not of this world.

He tells us of his joys and heartbreaks, his doubts and his confidences, his despairs and his faith. Lewis reveals himself as a master storyteller, impersonating a wide variety of characters from a young blind boy to Screwtape himself. The audience is spellbound throughout.

The C.S. Lewis we encounter at the Provision is more like a Spiritual Father offering wisdom and blessing to wayfaring pilgrims pausing on life’s journey. As if with a priest, our encounter with Lewis’ brings us into contact with God’s divine energies. Objects in life and on the stage may reveal dimensions unseen before. In his blog post “The God in the Bread” the always interesting Father Andrew Stephen Damick explains, “They [the objects] are simply vessels for God’s grace, His actual presence in and with us.”

The climax of this process occurs when Lewis, discovering that the tea he had prepared for us is cold, offers us an alternative. He walks to the pedestal globe of the world, opens the top of the globe to reveal a wine service and a decanter of port wine: We see our material world symbolically, simply, and brilliantly revealed to house in its very core, the precious blood of God himself, available for us to partake without condemnation, for the remission of sins, and unto life everlasting.

While this moment is the grand spectacle théâtral of the production, both the play and this stunning production surround it with smaller, but equally thrilling moments through story and spectacle.

And who is responsible for this merveilleuse soirée de théâtre?

First, playwright Tom Key who has searched the Lewis canon with a fine tooth comb, and selected only those pieces conducive to theatricality and the movment of the grace of God.

Second, director Timothy Gregory, who knowing that conflict is the essence of drama, has found every possible element of conflict in the script – linguistic, physical, situational, moral, and spiritual – and found imaginative ways to convey them with power and love. He weaves the action seemlessly from first person address to dramatic reneactment. Rhythmically the production is almost perfection – nothing too slow, nothing too fast, nothing to pointed, nothing thrown away.

And then there is the pantomimic dramatization! Britain’s Edith Evans and America’s Geraldine Page believed that an actor’s use of properties best reveals the character’s mind and heart in the moment. Certainly Mr. Gregory must be credited with at least some of the property work done by Brad Armacost as C.S. Lewis. Together they have a created a master class in prop work which is a must-see for all would-be actors and directors. (Watch the way Mr. Armacost folds the letter to Mary and places it in the envelope. The action speaks more eloquently than any words which might accompany it.)

Speaking of Mr. Brad Armacost ! Only about a half dozen times in over half a century of playgoing have I stopped myself after only a few moments of watching a actor’s performance to think, ”I believe this man can do anything.” Mr. Armacost is so at ease on stage; so comfortable with who he is; so grateful to have an opportunity to share (commune) with this audience; and seemingly so posessed of a mind, body, soul and spirit capable of leading us to whereever he chooses – it is a priviledge to be in his audience. (And these qualities were not those evident in C.S. Lewis himself, so one can’t attribute Mr. Armacost’s success to ”acting”.)

The visual and auditory components of the production support Mr. Armacort very well. Chazz Malott lights Mr. Lewis’ tales and reminiscences as if the light emanated from inside the man himself, revealing the condition of his inner light. Carl Ulazek avoided having to light the stark white walls of the historical Kilns by substituting dark wood paneling, though modern veneer should have been avoided. Mary O’Dowd found properties so appropriate and so theatrically imiaginative that they seem to have been especially designed for this particular production of this particular play. And the skillful sound compositions of Alaric ”Rokko” Jans add significance and dymanic emotional atmospherics without competing with the action.

The only false note of the entire event was the final one :

As he exits out the door, C. S. Lewis apologies to his guests, ”I’ve kept you far too long!”

At a performance of this power and artistry? No you haven’t. Not at all.