“An Introduction to God.” Is God Knocking? 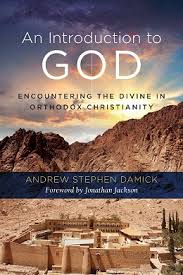 Introductions let me reconsider people and ideas, no matter how familiar I think I am with them, in new lights, from other perspectives.

In fact most of the books and articles I write are introductions. I enjoy discovering what I think about things, after the passage of time, and the gaining of new experiences. In my first book, Playing. An Introduction to Acting, I wrote: “A good actor never stops growing, learning, and introducing himself to acting.”1

So it was with great anticipation that I purchased Fr. Andrew Stephen Damick’s new book, An Introduction to God. Encountering the Divine in Orthodox Christianity. Father Damick hosts the website Orthodoxy and Heterodoxy which regularly enriches and stimulates my mind, while his own website Roads from Emmaus enlarges my soul and spirit whenever I check in.

The book turns out to be exactly what I had hoped it would be. Father Damick announces at the very beginning,

My copy now contains scores of highlighted sections. I’ll offer just a few to lure you into reading the book yourself:

• [E]ach human soul, down in its depths, longs for immortality. Eternity has been put into our hearts. We really cannot imagine what it would be like not to exist. We know death is wrong. We know love is better than hatred. We know beauty really is not merely in the eye of the beholder, but what is beautiful is so without any observation or judgment from us. These things together (and others) reveal to us that at the core of our being, there is a fingerprint left from the Creator, a sort of note from Him letting us know He’s looking for that encounter with us, that He’s knocking on our door.

• Christianity is a faith of people who stand in awe that the uncreated Creator of the universe would step into our reality and come looking for us.

• Jesus does not say the purpose of our faith is to make us “good people” or that it’s about “going to heaven” when we die. Nor is Christianity about feeling good, meeting religious people, knowing about theology, etc. Eternal life is to know God the Father and to know Jesus Christ, whom He sent.

• [M]ankind was not meant to live an isolated existence, apart from the ongoing, life-giving involvement of God. So we need access to God. But because we are created beings, there is no place in creation through which we can make the connection to the uncreated God. That is why the Son of God becomes the Son of Mary, the Son of Man. Because He is now human, we can access His humanity, which is created as we are. We can touch it. And in touching His humanity, we access His divinity.

• In worship, we become joined to the other, and in that joining, we become the other. This becoming is never a total re-identification. I cannot turn into a celebrity by worshiping him. I cannot turn into food or money by worshiping it. But I nevertheless become transformed by those images, corruptible and finite as they are, because we as changeable human persons are deeply affected by whatever and whomever we give ourselves over to.

• For the Orthodox, worship is not merely something Christians do, but what they are—indeed, it is what all human beings are. It is only in the act of worship that the human person is truly himself. Every person should find worship locations so that they can take the time to become themselves.

• Orthodox Christianity is not a faith derived from the Bible, with scholars and theologians searching through its text like archaeologists trying to piece together some dead civilization from clues unearthed in the dust. Instead, the Bible is derived from the Orthodox faith. Historically, the Orthodox Church is the community established through the preaching of the apostles and then continuing from one generation to the next. In that process of tradition, handing down the same faith within the community, the New Testament was written. In that process of tradition, the New Testament was canonized. And in that same process, the New Testament is interpreted.

• By grace (God’s presence in us), we can become human beings filled up with God, in such deep communion with Him that people see God when they look at us, that we begin to gain the attributes of God.

• Virtue—that is, morality—is not the purpose of all our dogma and our church life. We do not become Christians in order to become moral people. Christ did not come to this Earth in order to make bad people good. He came in order to make dead people live. And that is only accomplished by participation in the Truth, that is, in Jesus Christ Himself, who is the Truth

• It also means we work directly to ease the suffering of others, even if we disapprove of their behavior or lifestyle or recognize it as genuinely harmful. We also work to bring others to understand the Orthodox Christian viewpoint through persuasion and active love.

• We cannot simply turn around in a circle, announce that we have not seen God, and thus declare Him not to exist. We have to know how to look for Him, how to ask for His presence.

I know of no better written guide for anyone wanting to know how to look for God, “how to ask for His presence”, than Father Andrew Stephen Damick’s new book. Don’t think you know his book from reading my few select passages; his book is so rich that your own copy will have many, many other passages highlighted, each of which will speak to you personally.