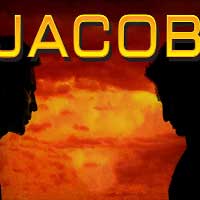 Chicago is as known for new plays, as the theater is for pretentious non-musical plays based on the Bible. Poet Archibald MacLeish’s 1958 over-hyped retelling of the book of Job, J.B.,   was camouflaged by the theatrical pyrotechnics of director Elia Kazan and the glorious voices of master actors Raymond Massey, Christopher Plummer, and Pat Hingle.

So it was with mixed emotions we ventured to Provision Theater’s premiere production of Timothy Gregory’s new play, Jacob, “the classic story of Jacob wrestling the Angel from the Book of Genesis… a modern-day retelling: set in a luxurious high rise in downtown Chicago.” Most critically successful treatments of Biblical history accomplish only blasphemy (recall Terrence McNally’s Corpus Christi (1997), while most theologically successful treatments never make it beyond the local Church basement drama troupe. We went to the Provision more out of a desire to support the theater’s admirable mission than to experience a good evening of theater.

If one never knew that Jacob had anything to do with the Bible, it would still be one of the most remarkable new plays we have seen since moving to Chicago, on a par with any new play we have seen at the more prominent Goodman Theater. Mr. Gregory clearly knows how to write for the stage: his plot is compelling, his characters are engaging, and his dialogue is fresh, amusing, and unique. Even though I knew the plot, I was on the edge of my seat; I can only imagine how one new to the story reacted.

With  his play, Timothy Gregory won the theatrical trifecta:  1) a thrilling new play, 2) a reverential retelling of a foundational story of Israel’s history, and 3) a mysterious dramatic prophecy of the coming of Jesus Christ and of the establishment of His Church.

No matter who you are, you win with Jacob.

Timothy Gregory not only wrote this wonderful play, but he co-directs it with Lia Mortensen. And Mr. Gregory wears a third hat in this production: he acts. He plays The Repairman from Gilead Security.

Why are three hats significant? In the history of world theater a single person has rarely done all three tasks as well as Mr. Gregory does with this production. George M. Cohan, Sam Shepard, and Tyler Perry are the few Americans who come to mind, while in Europe, Moliere towers above all.

Does this sound too amazing? Yes, I thought so, too… until I went to see Jacob.

Mr. Gregory and Ms. Mortensen demonstrate that they know what they are doing early, by their superb casting. John Mossman (Jacob) and Rod Armenstrout (his lawyer Mike) set the play off with a bang. Jacob’s family – Lia Mortensen as wife Rachel, Johnny Rabe as son Josh, Renee Matthews as Jacob’s mother Becky, and Chuck Spencer as the family rabbi fresh from a scandalous Bar Mitzvah – are so good that they do not seem to be acting. They seem to have brought their actual family drama onto the stage before us. The playwright, following the lead of Moliere in preparing for the Third Act entrance of his Tartuffe, and the directors, have created great anticipation for the entrance of Eli. Often such a buildup is hard to fulfill. But the Mortensen/Gregory choice of Bryan Kelley demonstrates the power of “less is more” even on stage. Mr. Kelly’s size speaks volumes, but it is his nuanced performance which gives such wonderful depth to a character with a short stage life.

Secondly, Mr. Gregory and Ms. Mortensen have blocked the play imaginatively and handed the actors pantomimic dramatizations which cannot help but reveal character and relationships. Focusing on the play and the acting, the Mortensen/Gregory production seems to let scenery and costume take a backseat to the powerful sound and lighting designs.

Carl Ulaszek and Timothy Gregory (yes, he had a hand in that as well!) have made a set which serves as a biomechanical structure for the drama’s climactic full stage, no-holds-barred, wresting match between Jacob and The Repairman. The scene is very exciting and clearly exhausts the characters. However, besides exhaustion, the very long match could do with some character development along the way, both to sustain the audience interest, and to demonstrate the process by which the match changes Jacob psychologically and spiritually, as well as physically.

To compress and condense such a sprawling story into 90 minutes without losing anything important is breathtaking to comprehend. Jacob’s two wives become one with Rachel, an Israeli army veteran, for whose hand Jacob has had to wait. Jacob’s twelve sons have become Josh (short for Joshua, the name of the Christ to come) and later Joseph, another prophetic type of Christ. While wrestling with his son, Mr. Gregory has Josh fight under the name of “St. Pierre”, giving the character the additional powerful identity as the one upon whom Christ will found his Church, St. Peter. So much dramaturgical and theatrical wisdom in one play is a joy to behold.

Jacob is a triumphant production. Appropriately, one of the meanings of the name “Israel’ is “who prevails with God”. With Jacob, the Provision Theater triumphs with God.