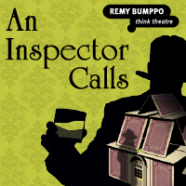 The stated mission of Remy Bumppo Theatre Company, in its 17th year, is to “engage audiences with the emotional and ethical complexities of society through the provocative power of great theatrical language.” J. B. Priestley’s 1945 mystery An Inspector Calls is probably more provocative now than when it premiered in Josef Stalin’s 1945 Russia, but for reasons which Mr. Priestly could never have foreseen.

The first great theatrical mystery was not a “who-done-it”, but, like  An Inspector Calls, first, a “why-did it-happen“, and then, a “who-is-responsible.” Sophocles King Oedipus sets off to find out why the plague is ravishing his kingdom, only to discover that he is responsible. This discovery (anagnorisis) results in a plot reversal (peripitea), the pursuer becomes the pursued, and the inspector becomes the inspected.

In Priestley’s play, an inspector arrives, not searching for the truth, but using the supposed truth he already holds to confront the wealthy 1912 Birling family with the tragic results of its social irresponsibility – a girl supposedly known to all of the family has supposedly committed suicide. The inspector wants the family to accept the painful responsibility for a death they could have supposedly prevented.

“Supposedly” enters the action during Priestley’s clever Second Act, when Gerald Croft, the fiancée of the young Birling missy, enters with his “little grey cells” firing on all cylinders, in the manner of Agatha Christie’s Hercule Poirot. By challenging the evidence presented by the inspector, Mr. Croft not only seems to free the family from any responsibility to the dead girl, but brings into question whether the suicide actually occurred!

Mr. Priestly has presented a lovely dramatic conundrum. His solution is less satisfactory. Priestly liked to theatricalize the philosopher John William Dunne’s (1875–1949) ideas of parapsychology and multiple time dimensions. Unfortunately, Priestly stuck a cheap philosophical  trick on the ending of An Inspector Calls.

In 1945, the play provoked laissez faire capitalists by championing socialist communism as the cure for society’s ills. Many intellectuals of the time were fascinated by Stalin’s “paradise” and hoped his successes could be copied in the West.

Today the play is even more provocative than in 1945. Civilization has heard from literally thousands of witnesses, from the great Alexander Solzhenitsyn to the traumatized  immigrant neighbor next door) of the total failure of the socialist-communist experiment. Mr. Birling’s Act I prophesy, written as an ironic and foolish capitalistic understanding of the forces of history, has proven to be accurate:

Now you three young people, just listen to this – and remember what I’m telling you now. In twenty or thirty years’ time – let’s say, in 1940 – you may be giving a little party like this – your son or daughter might be getting engaged – and I tell you, by that time you’ll be living in a world that’ll have forgotten all these Capital versus Labour agitations and all these silly little war scares. There’ll be peace and prosperity and rapid progress everywhere – except of course in Russia, which will always be behindhand naturally.

Today communism is more than a theory waiting to flower. Communism has a historical record which shows Russia and all the former communist nations “behind” capitalist societies precisely  due to the application of communism favored by Priestley. Today both the libertarians in the audience and the socialist-communists in the audience each have track records to defend. The provocations can be more even-handed than they were in 1945 when bleak reality had to defend itself against a rosy theory. Now we see that each side is bleak.

But what about the Remy Bumppo production of this provocative play? Priestley’s language could not be handled better. The cast is superb, from top to bottom, in understanding both the rhetoric and the characters from which it flows. From the dazzling pyrotechnics of Nick Sandys’ Inspector, Roderick Peeples’ Arthur Birling, and Lia Mortensen’s magnificent Sybil Birling, to the thrilling dramatic pauses of Greg Matthew Anderson’s Gerald Croft, to the Goldilocks-like performance  (not too much to detract and not too little to disrespect) of Maggie McCally* as Edna, the cast is the most uniformly professionally accomplished I have seen this year.

Praise must go to director David Darlow for casting so well and for modulating the performances into such a fine ensemble. The stage movement is lean and clean, keeping the focus on the language (where it should be) rather than on added stage business. And finding the legitimate humor in serious or didactic play is always the sign of an intelligent production. Doreen Feitelberg has led the cast to a consistent and non-distracting dialect.

The design of a turn of the century British family falters only slightly as a few costume and set pieces seem more modern than the 1912 vintage  noted by the dialogue. The projections outside the windows and the lighting changes during characters’ monologues seem gratuitous and distracting, almost as if the production didn’t trust the actors to hold the audience’s attention without special effects. These actors need no technological props.

But there is another voice, whose arrival we celebrate this month, a voice telling us that each of us is responsible for the person who literally crosses our path. We can neither walk by, nor can we merely vote for another state program. Each of us must act as the Good Samaritan to the one we find in need.

That is the message I took from the Greenhouse Theater. And that is a very good message to have at Christmas.

*Maggie McCally was student in my theater classes and college productions. A teacher can have no greater thrill than to see a talented student part, and such a vital part, of such a fine collection of actors.

Like Loading...
December 9, 2013 – 1:04 pm | By Paul Kuritz | Posted in History, Mini-Review, Politics, The Gospel of the Kingdom, Theater | Comments Off on Remy Bumppo’s An Inspector Calls: Excellent Acting, Provocative Script