A CAROL FOR CLEVELAND: A Christmas Classic 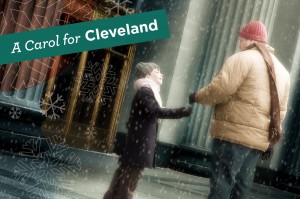 Having been involved in several myself, I can attest to that fact that nothing is more exhilarating or harrowing than the production of a new play. Without a track record, all involved proceed on a wing and a prayer, with faith in great hopes and detailed plans.

So when a major American theater announces the production of a new Christmas play (and not just a new Christmas play, a Christmas dramatic narrative involving multiple regional locations and characters), the words of Linda Loman come to mind – “attention must be paid.” The fate of A Carol for Christmas, a play by Eric Coble, based on the novella by Les Roberts, owed most, I believe, to the daring of the directors – Artist Director Michael Bloom, Managing Director Kevin Moore, and production director Laura Kepley. They rolled the dice.

The novelist and the playwright gave them much with which to work.

To call the work a “Carol”.

The first carol was sung two-thousand and twelve years ago by angels hovering over the plains of an insignificant  town called Bethlehem:

“Glory to God in the highest, and on earth peace, good will toward men.”

Since that time, a Christmas carol has been an announcement that the Kingdom of God has broken into the kingdom of man, that the long-awaited Age to Come has invaded the Present Evil Age. As Handel’s chorus sings, “The kingdom of this world is become the Kingdom of our Lord and of His Christ; and He shall reign for ever and ever.”

The title A Carol for Christmas announces that this play shall demonstrate the Kingdom of God breaking into the City of Cleveland, Ohio.

To make the location of the action important to the story.

Bethlehem was a dusty nowhere place, until the Kingdom of God invaded. The action of God in the place alone made the town important for all time. “Bethlehem” means “the city of bread”. By God choosing Bethlehem to proclaim his Kingdom, the city became home to the One who would be the Bread of Life, saying to all, “take and eat…”

The Cleveland of the 1970s has as little distinction as Bethlehem prior to the first century – “The Mistake on the Lake.” Certainly the decision to travel to Cleveland seemed like a mistake to the play’s protagonist, Ed Podolak. He finds himself hungry, cold, and hallucinating on Christmas Eve, 1979. But when Ed is invited by little Charlie to join his family for a Christmas Eve dinner, the stage is set for a miracle, for  the Kingdom of God to flow through Charlie’s Cleveland heart  into Ed’s troubled heart. Charlie, the conduit of God’s redemptive grace, represents Cleveland as the giving, helping, caring, other-directed place, in contrast to Pittsburgh (Ed’s hometown) a place identified with looking-out-for number-one, pride, and self-sufficiency. For Ed, Pittsburgh is the home of the Steelers (stealers?) versus the home of the Browns (the givers?). The two cities become macrocosms of the protagonist’s old friends: Jake the selfish, do-whatever-it-takes-to-win guy, and Fez, the friend who believes life is about doing for others first. Ed’s eventual movement from Pittsburgh to Cleveland represents a spiritual movement of the soul, from allegiance to the Kingdom of Man in this Present Evil Age to the Kingdom of God in the Age to Come. The play shows Ed Podolak caught between the two kingdoms and between the two ages: “How should I live? Depend on myself? Or accept the help of friends and neighbors?”  Ed’s final commitment comes to fruition when he moves his family from Pittsburgh to Cleveland.

To make the inciting incident one of thievery.

Christmas celebrates God’s giving us a Savior and we honor that act by giving of ourselves to others. Interestingly, the great Christmas stories are based on the opposite action: taking. (“Taking” imitates King Herod’s taking of the innocent lives as he sought to destroy the king of the Jews.) In It’s a Wonderful Life George Bailey is accused of taking bank money. Dickens’ Ebenezer Scrooge is a miser, one who has taken more money than he should. In Henrik Ibsen’s Christmas play A Doll’s House, Nora Helmer has forged papers to misappropriate money. In Dickens’ Christmas novel Great Expectations, Pip spends Christmas Eve stealing a file and a pie from his sister and brother-in-law. So Mr. Roberts’ decision to have his protagonist, Ed Podolak, steal is in the great tradition of successful Christmas stories.

To draw an unlikeable hero.

Aristotle noted that audiences enjoy characters who are in some way better than we are. However, he also insisted that characters be like us in order to enjoy an empathetic response from an audience. Les Roberts’ Ed Podolak is a working stiff, a character rarely seen onstage since the plays of Clifford Odets and the Group Theatre. Ed is Ralph Cramden without the charm or twinkle in the eye. Like so many men, his primary emotional response to life is anger. His tender side seems limited to embarrassment. In other words, Roberts’ protagonist is too much like us, if we were to really look inside ourselves. This was bold choice in character drawing and a thrilling one to watch.

Of all the characters on stage, the one least deserving of God’s mercy or favor is Ed Podolak. He has abandoned his family rather than swallow his pride to accept help from neighbors and relatives. He has denied his family any explanation or communication for over a year. And the money he steals is not to send back to his needy family, nor to buy a bus ticket back to his wife and children whose hearts are breaking in his absence. No, Ed steals the money so he can stay away from his family, so he can afford another month’s rent in a flop house.

Ed is at best a nobody. But so were the people of the original Christmas carol. Mary and Joseph were nobodies until God chose them The shepherds were ordinary loners until God selected them to hear the good news first. They didn’t merit anything from God. Yet God’s redeeming grace dawned on them.

God’s grace needs a conduit. Clarence the Angel delivers it to George Bailey in It’s a Wonderful Life. The Ghost of Christmas Future provides one to Ebenezer Scrooge.

A Doll’s House is a tragedy precisely because God’s grace remains absent; the “miracle” the Helmers expect never comes.

God’s redeeming grace falls on Ed, through a child, Charlie, Jesus’ model citizen for his Kingdom. Little Charlie Tobric sees Ed steal the money. Does he call a cop?  No, he invites Ed to Christmas Eve dinner at his house (“take and eat’) and demands his mother go along with his plan. Charlie enjoys being God’s emissary – he wants people to see his limp so that their attention might be turned to the One who Healed the Lame and Made the Blind to See.

When faced with God’s overwhelming grace, Ed Podolak repents – he changes direction -and calls his family on Christmas morning, the dawn of his Redeeming Grace.

Playwright Eric Coble took Roberts’ stew of people, ideas, times, and places and crafted a compelling auditory and visual representation of the collision of Kingdoms (God’s and Man’s) and Ages (The Present Evil One and the One to Come)arising out of the protagonist’s fevered mind. Mr. Coble’s expressionistic time-space continuum is echoed in the audience’s actual surroundings:

The audience sees people of 1979 Cleveland celebrating the original centuries old carol. They observe a man recalling the pivotal events of his life during the 1960s, while his adult son accompanies him throughout his past. All of this happens in front of a 2012 audience sitting in a 1921 theater! The Playhouse audience time travels.

What holds this narrative together is Mr. Coble’s major invention, a narrator known as “This Guy,” who comes out of the audience to tell us a story he clearly loves. Combining the narrative and the dramatic on stage is rarely done; it is very difficult. (Aristotle believed the modes were incompatible.)Occasionally Shakespeare, Brecht, and Thornton Wilder succeed. A Carol for Christmas places Eric Coble in contention for membership to that list.

Mr. Coble’s great revelation of This Guy’s identity which concludes the play is a coup de théâtre  not see since Gillette Elvgren’s Five Cups of Coffee (2006). The trope of the son telling of his father, is as American as Biff Loman vowing to tell of Willy, and as cosmic as the Son arriving to let us know of His Father’s love.

A Carol for Christmas is an accomplishment few theaters have been able to achieve – not only a new Christmas play, but also an important Christmas play,  revealing not only the intelligence and passion of its creators, but also the magical transformation of 1979 Cleveland into a city worthy of major attention.

Like Loading...
December 24, 2012 – 2:32 pm | By Paul Kuritz | Posted in from Paul, The Gospel of the Kingdom, Theater, Theology, Uncategorized | Comments Off on A CAROL FOR CLEVELAND: A Christmas Classic