Salmon Fishing in Yemen and The Little Engine that Could 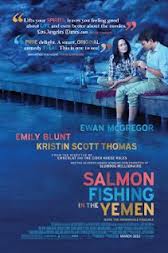 In the film, Salmon Fishing in Yemen (2011) Sheik Muhammed of Yemen’s unlikely dream – salmon fishing in Yemen- comes true due to the efforts of Dr. Alfred “Fred” Jones, a fisheries expert, and the sheik’s British agent, Harriet Chetwode-Talbot.

The film has been praised as a film about “faith.”

But what kind of faith?

The faith of The Little Engine that Could. Doing what you didn’t think you could do. “Can-Do” faith.

Is this  Christian faith?

The Christian faith arises once one admits that, despite one’s best efforts, one cannot and never will be able to stop failing, hurting oneself and others,  offending God.

Christian faith is based on the “Can’t-Do” spirit, the opposite spirit celebrated in this film.

The “Can’t Do” spirit is the only spirit which can hear the News of the Gospel as Good News.

The “Can Do” spirit doubles down on faith in oneself and, despite the odds, succeeds. It is the “Can Do” faith that brings Tinkerbell to life in proportion to the amount of the audience’s hand-clapping. On the other hand, the power of the Christian faith does not depend on quantity – faith the size of a mustard seed can move mountains because that faith is based on the victory already won.

The “Can’t Do” spirit welcomes the Good News with joy:

God has freed us from the consequences of sin by taking them upon Himself! Now we shall live forever, in joy, without suffering or pain, guilt or shame!

The faith of the Sheik, Harriet, and Dr. Jones- in themselves – creates their impossible dream.

The promise of God – accomplished in history in the death and resurrection of Jesus Christ – creates the faith of the Christian.

Christian faith comes from without, in an announcement of a fact: God so loved the world that He gave His only begotten son that whosoever believes shall never die but shall have eternal life.

The film’s characters have faith in their feelings.

The Christian, regardless of his feelings, puts his faith in the Good News he hears from God.

Like Loading...
November 14, 2012 – 10:38 am | By Paul Kuritz | Posted in Movies, The Gospel of the Kingdom | Comments Off on Salmon Fishing in Yemen and The Little Engine that Could