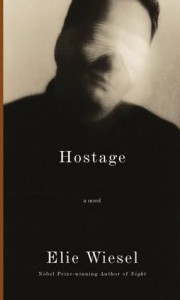 St. Cyril of Jerusalem, in instructing catechumens, wrote: “The dragon sits by the side of the road, watching those who pass. Beware lest he devour you. We go to the Father of Souls, but it is necessary to pass by the dragon.” No matter what form the dragon may take, it is of this mysterious passage past him, or into his jaws, that stories of any depth will always be concerned to tell, and this being the case, it requires considerable courage at any time, in any country, not to turn away from the storyteller.[i]

No one has chronicled the life of the dragon by the side of the road for modern readers with more courage than Elie Wiesel.

With his new novel, Hostage, Mr. Wiesel takes up the newsworthy activity of the dragon – hostage-taking. Shaltiel Feigenberg, a meek Brooklyn storyteller, is taken hostage simply because he is a Jew. His captors are an Italian and a Palestinian who seek an exchange for two Palestinians held by the West.

The novel chronicles Shaltiel’s thoughts during his harrowing captivity.

In all ways, Mr. Wiesel’s story is one of capture and rescue, a universal trope, whether of physical, psychological, or spiritual capitivity.

As Mr. Wiesel has said on many occasions, storytelling is our uniquely human trait. No other living thing engages in this behavior. So a master storyteller’s story of a minor storyteller is a profoundly human story.

And a profoundly spiritual story.

Human storytelling is a gift from our Creator, in whose story – Creation –we live.

Life is God’s story, told by Him in Scripture. As theologian N.T. Wright reminds us,

In the Christian canonical Bible there is a single over-arching narrative. It is a story which runs from creation to new creation. The great bulk of the story focuses quite narrowly on the fortunes of a single family in the Middle East. They are described as the people through whom the creator God will act to rescue the whole world. The choice of this particular family does not imply that the creator has lost interest in other human beings or the cosmos at large; on the contrary, it is because he wishes to address them with his active and rescuing purposes that he has chosen this one family in the first place.[ii]

Through this one family came God’s only-begotten son to humanity in the person of Jesus the Savior.

Theologian Michael Horton has developed a systematic theology based on God’s revelation in history as story:

A modern myth is that we outgrow stories. When someone asks us to explain who we are, we tell a story. Furthermore, we interpret our personal stories as part of a larger plot. Who are we? Why are we here? Where are we going? What’s the point? Is there a God and if so can we know him? Why is there evil in the world?…The Christian answers these big questions by rehearsing the story of the triune God in creation, the fall of the creatures he made in his own image, the promise of a redeemer through Israel, and the fulfillment of all types and shadows in the incarnation, life, death, resurrection, ascension, and return of Jesus Christ. The Apostles’ and Nicene creeds are not just a list of key doctrines; they are a confession in the form of a story, our shared testimony to the most significant facts of reality.[iii]

The people of God, both Jew and Christian, believe, like Shaltiel Feigenberg, that God hears our stories. Blanca, the hero’s wife, tells the police,

My husband has only one obsession: fantasy. He has seen and lived through too many of the world’s sorrows and bereavements, you understand; he believes it’s his mission to side with those who suffer, to tell their stories.

As Shaltiel notes in the novel, God also sides with those who suffer and also listens to our stories: “He alone understands.”[iv]

Our stories are but subplots in His great story of Rescue.

who strove with sin, death, and the devil and overcame them, and thereby rescued all those who were captive in sin, afflicted with death and overpowered by the devil.[v]

Shaltiel Feigenberg is eventually rescued. Then he must decide to trust the open door to freedom offered by his former captor.

We are likewise rescued. Then we must decide what to do about God’s divine gift of atonement through His son. Accept it, reject it, or keep on trying to rescue ourselves.

Mr. Wiesel’s storyteller-hero is a representative human, struggling with his family’s history with God, and His present relationship with both His creator and his captors.

Vern Sheridan Polythress summarizes the value of Wiesel’s story for us:

Storytelling is for human beings made in the image of God. We can step back and look at ourselves and reflect about ourselves, in a form of transcendence that images or reflects the transcendence of God.[vi]