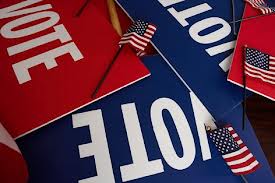 The gospel writer Mark adds “And they marveled at him.”

Because Jesus provides no details, where, the adage has it, the devil resides.  Nothing about voting, since the practice was unknown. (Replacement disciples were not elected. They came through a process of prayer and lottery.) No suggestion to petition the government to do the will of God.

Some Christians ask, “How would Jesus vote?”

Theologian Michael Horton suggests this is the wrong question.

Jesus didn’t vote: He did much more. He took upon Himself all of our sin and the punishment for it, and asked for one thing in return:

All He asked was belief in Him and what He had done.

Christians, like Christ, follow the laws of God first, in loving gratitude for what God has done, and second, as evidence that we do, in fact, believe in God’s gracious gift.

So we are back to the “rendering” issue.

So perhaps fulfilling Jesus’ dictum isn’t so easy. Perhaps Jesus knew it is an ongoing struggle for the Christian living in two ages – the Present Evil Age and the Age to Come, and two cities –the City of Man and the City of God.

Some Christians want the fullness of the Age to Come now and believe political action to be a way to advance God’s Kingdom. Theologian Michael Horton explains:

Longing for Christ’s return, the Christian is world-weary because this age lies under the power of sin and death. But even now there is a new power set loose in the world-the penetration of this present evil age with the powers of the age to come. So the Christian is longing for the final liberation of creation, not from creation. Precisely because the believer is rooted in the age to come, of which the Spirit’s indwelling presence is the down payment,   there is a simultaneous groaning in the face of the status quo and confidence in God’s promise to make all things new.[iii]

Political action seems like it might be the way to “make all things new.” But it may just be a false idol. Michael Horton again:

Unlike the various  vocations of Christians in the world, the institutional church  exists not to fix the world’s temporal problems (which inevitably  divides Christ’s body over policy agendas) but to administer  Christ’s own service of reconciling sinners to himself, caring  for his flock in body (through the diaconate) as well as in soul  (through the ministers and elders). Having been first ministered to in these ways, the members love and serve each other according to their particular needs and then carry this service out to their non-Christian neighbors. The Scriptures alone are the church’s constitution, and the church has no legitimate authority or power to speak or act beyond this divine Word. However convinced we are in our own minds about how to vote, ministers are Christ’s ambassadors, completely restricted by his words. They abuse their authority when they use this office to endorse candidates, parties, and policies.[iv]

[In the] public assembly of his people, God is at work raising the dead. Through Word and sacrament, Christ’s kingdom is breaking into this present age in the power of the Spirit. This in-breaking is not propping up this present evil age, but it is sowing the seeds of the age to come. It comes not to improve people or societies but to kill and make alive in Christ. Whatever we might need in society, the church doesn’t need a cultural shift; it needs a paradigm shift from our agenda to God’s.[v]

The church as an institution appointed by Christ has a narrow mandate with global significance. Individual Christians, however, have as many mandates as they do callings: as parents, children, extended relatives, neighbors, coworkers, and so on. In addition  to loving and serving each other in the fellowship of saints, believers   are enjoined “to aspire to live quietly, and to mind your own  affairs, and to work with your hands, as we instructed you, so  that you may walk properly before outsiders and be dependent  on no one” (1 Thessalonians 4:11-12). It may not sound as grand as creating a global trading policy or ushering in the kingdom by driving out the “Romans” (whether Democrats or Republicans) in the next election, but it is the proper kind of discipleship for this phase of Christ’s rule: the kingdom of grace, which only at Christ’s return will be a kingdom of glory.[vi]

So what is appropriate in the kingdom of grace?

I believe that every Christian citizen who lives in a democracy has at the very least a minimal obligation to be well-informed and to vote for candidates and policies that are most consistent with biblical principles.[vii]

So what is a Christian to do the November?

Follow the laws of God, and support those who do likewise. Jew or Gentile, Christian or non-Christian.

Those who follow the laws of God honor God.

They will get my vote.

[i] Grudem, Wayne. How Christians Should Relate to Government A Zondervan Digital Short, EPub Edition, January 2012.