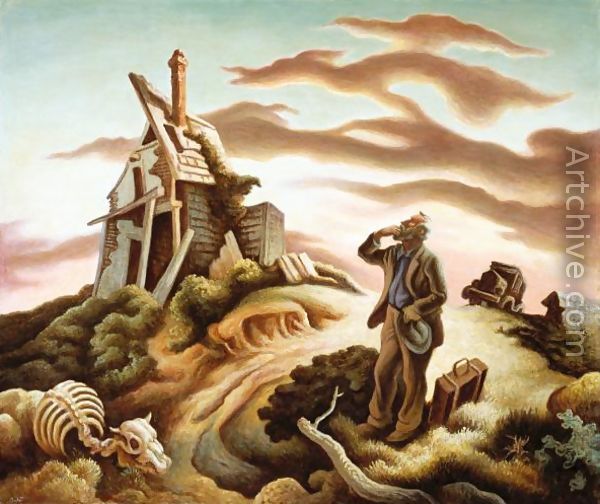 When reading Peter Hitchens wonderful book The Rage Against God I was particularly struck by his personal reflection on Thomas Hart Benton’s The Prodigal Son. I wanted to post a blog about that but found that Dennis Skinner had done it for me. So why try to reinvent the wheel.

Christ’s story of the Prodigal Son is one of the most beloved parables in the Bible.  It tells of the long-suffering love of God through the eyes of a father who has the heartbreak of seeing his son go into a far country of sin. When the impoverished son, bearing the consequences of his own foolish actions, comes back home, his father meets him with robe, ring, and rejoicing.

Peter Hitchens, award-winning journalist, in his book, “The Rage Against God”, tells the story from a different perspective with himself as the returning prodigal.  After many years of self-imposed exile from faith, he began his return to find, to his surprise,  that things were not as they had been. During his absence his church had changed.   He found that in an effort to appeal to more modern thinking, the church had jettisoned much of what he now longed to have.  In telling the poignant story, he uses a description of the painting, “The Prodigal Son”, by Thomas Hart Benton.

He has come home too late.  Nobody has seen him from afar and run joyfully to meet him.  There will be no forgiveness, no best robe, no ring, no “music and dancing”.  He stands in his shabby clothes with his poor, roped suitcase.  A beaten-up car- the last trace of his squandered wealth- parked in the background.  He is gaping, with his hand to his mouth, at the ruin of the family homestead, ruin caused by his own greed and wastefulness.  He looks as if it is just dawning on him that he is stupid and cruel and without hope.  The light is failing in a chilly sky beneath wind-ripped, twisted clouds.  Instead of a fatted calf, there is a stark white animal skeleton, the skull horned, lying in the unattended grass.  We can guess at the grief, resignation, and failure that have overtaken the family and its home during his heedless absence. Who can he blame for it but himself. The desolation is infinite.

And as I surveyed the melancholy remnants of my own church, out of which I had petulantly stomped, I felt the same.

Where had I been when I was needed?

In an effort to find what he calls the “citadels of the old worship”, he found that it was not simply the text and the prayers that had changed.

It was not the language they disliked (though they probably did dislike it too).  It was what the words meant.  The new, denatured, committee-designed prayers and services were not just ugly, but contained a different message, which was not strong enough or hard enough to satisfy my need to atone.

Hitchen’s testimony illustrates two points.  First, the church always relinguishes its strength when it takes as its goal being relevant to the age instead of being faithful to the Word. As Dieterich Bonhoeffer warned the church in his day,

Do not try to make the Bible relevant. Its relevance is axiomatic.

But there is also a warning to prodigals.  Prodigals’ sins are not limited to those of “riotous living” and wasteful spending.  They also are guilty of the sin of presumption; presuming that while they are in the far country, all important things will remain the same.  They count on a spiritual and ethical underpinning of the culture to remain in place even as their actions erode that foundation.

Not all prodigals come home.  Christ’s prodigal did; Peter Hitchens has.  Here’s hoping more do so while the homecoming still means something.