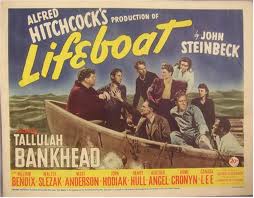 The ship is sinking. The seas are rough. The only lifeboat can hold no more than six. Eight people climb aboard. Who should stay? Who should go? Many group discussions of ethical dilemmas begin with scenarios like this one.

Partially to spur American entrance into the world war against the Nazis, Alfred Hitchcock appropriated the familiar framework for his film Lifeboat (1944). The screenwriter Jo Swerling testified that Hitchcock’s purpose was to make an audience member “say to himself, ‘Beware the Nazis bearing gifts.” However some influential critics at the time, such as Bossley Crowther and Dorothy Thompson, saw the film as a paean to the German Supermen when compared to the decadent American and British characters. Reacting to the criticism, studio executives gave the film a limited and brief run.

Today some critics object to the film for other reasons. Some see the film as an embarrassing collection of stereotypes, especially the African American porter Joe.

What the screenwriter and the director sought was a “world in miniscule”, composed of archetypal characters in a nightmarish situation:

The arrival of a final survivor (Willy), the Nazi captain of the very boat which sunk their ship brings the first of a series of decisions the crew must make:

Kovac says he should be thrown back into the sea. A German Nazi can’t change his nature “any more than a snake can,” thereby associating Willy with the charming, wise, but ultimately deceitful and destructive serpent of the Garden.

Connie urges mercy because “he was just following orders”. If they were to throw him overboard, they’d be no better than the Nazi enemy. The Christian way would be, she advises,  to spare him to convert him.

“Sparks” reminds everyone that they have no right to execute Willy because he is a prisoner of war. Nurse McKenzie agrees with Sparks

Joe prefers to stay out of the deliberations.

Rittenhouse calls for a vote because “it is the American way.”

The vote spares Willy, but puts him in restraints.

Kovac prophecies, “He’ll double-cross us the first change he gets.”

Alice’s baby is found to have died and the mother is suicidal.

2.What to do about the dead and suicidal passengers?

The baby “Johnny” is given a formal burial at sea with Rittenhouse reciting the Psalm 23 over the deceased. But as he cannot recall the lines, Joe finishes the psalm. (Unknown to all aboard, God’s word proves the sword which will ultimately defeat Satan’s Nietzschean strong man).

Mrs. Higgins blames Willy for her son’s death. She is bound by ropes to prevent her from hurting both Willy and herself. Nevertheless, she manages to slip to a watery death while the rest of the passengers sleep.

The crew needs to determine “west” so that they might steer the boat to safety in Bermuda. The sun is not an accurate guide for the moment. Sparks and Kovac suggest one course, but Willy, speaking through Connie’s translation, insists on the opposite direction.

Connie maintains that as a boat captain Willy should know best how to control a boat. Kovac retorts, “I won’t trust anything he says.”

Kovac is elected lifeboat captain and sets the direction opposite of the one Willy suggested, assuming the truth to lie in the opposite direction of self-serving Nazi advice.

Willy claims that he was a doctor before the war. Kovac doesn’t believe him. He suggests Willy would be a military physician if that were the case. The group, however, sides with Willy out of compassion for Gus. They agree with Willy’s diagnosis: Gus’ foot needs immediate amputation to avoid gangrene poisoning.

As a prelude to the amputation of Gus’ foot, Joe plays “Don’t Sit under the Apple Tree” on his flute, reprising the image of the serpent in the garden. Then, while all tend to Gus, Joe prays, returning the sword of the Spirit to the scene.

Needing to get Gus to professional medical care, the passengers re- check their navigational bearing. Willy again maintains they are heading in the wrong direction.

The group decides to reject Kovac’s advice and go with Willy. Thus the person responsible for placing all of these people in peril is the one they trust for deliverance.

Slowly Willy’s deceit becomes evident. As Sparks notices the stars he realizes they have been heading away from Bermuda, their safety, and toward Willy’s fleet, their imprisonment. Willy’s sweat and perspiration clue them that he must have water. And Willy’s “wristwatch” proves to be a secret compass.

Kovac wants to kill Willy immediately, but the group prefers to tie him up since he has rescued Gus from the sea during a storm. However, Willy quietly kills Gus for having seen his secret stash of water. (“What good could life be to someone like him?”)

When the storm destroys their rations and their sail, the group’s survival depends on strong Willy’s rowing. Connie says that “Willy’s made of iron. The rest of us are just flesh and blood.” Kovac defends their “hunger and thirst” as “good things to write about.” He sadly realizes they have all become Willy’s “accomplices.” Connie agrees:  We’ve “kowtowed to a man who was kind enough to take us to a concentration camp.” Theologian Michael Horton explains Connie’s insight:

Satan “has fancied himself as a deity in his own right. And to the extent that human beings are seduced by his deceit, they are under his immediate dominion, even though God alone is ultimately King.”[i]

As their superior in every way, Willy expects gratitude from his shipmates for what he considers his resourcefulness. As he rows, he taunts them with “Du, Du, Liegst Mir im Herzen” with the lines,

You don’t know how good I am for you.

Eventually the survivors can take no more. They attack and finally kill Willy. Joe watches silently.

3 Rittenhouse repeats the question still hanging over the action: “What do you do with people like that”

Joe breaks his silence to object: “No we’ve still got a motor.” He looks to the Heavens.

Connie, deciding that faith also requires action, volunteers to sacrifice her diamond bracelet as fish bait. A fish (the ancient symbol of Christ) would provide the water necessary for the passengers survival, their victory over death.

As a fish is miraculously caught, Joe spots a ship on the horizon. But in the excitement, both the fishing lure and the newly caught fish are lost to the sea.

However, ironically, the ship proves to be a German ship which immediately opens fire on the beleaguered lifeboat, only to be sunk itself by an oncoming Allied vessel. As the German boat sinks, and the lifeboat survivors see rescue on the horizon, a justified Joe remarks, “He likes us, Mr. Rittenhouse.”

But when  a survivor of the sunken German boat climbs onto the lifeboat, the crew is again faced with the question they faced at the beginning of their plight with Willy:

When the German youngster pulls a gun on them, they answer the question by ending him.

But the main question continues with the film’s final exchange:

5. Kovac: “What are you going to do with people like that?”

Garrett: “I was thinking about Mrs. Higgins and the baby and Willy and Gus.”

Connie: “Well, maybe they can answer that”

Connie  has pointed to a divine perspective. Jesus offered this perspective when He gave God’s answer in the Parable of the Strong Man (Matthew: 12:25-29);

If Satan casts out Satan, he is divided against himself. How then will his kingdom stand? And if I cast out demons by Beelzebub, by whom do your sons cast them out? Therefore they will be your judges. But if it is by the Spirit of God that I cast out demons, then the kingdom of God has come upon you.  Or how can someone enter a strong man’s house and plunder his goods, unless he first binds the strong man? Then indeed he may plunder his house.

Evil means are not the way to defeat evil. The strong man is not bound by human strength alone. Only the Spirit of God can bind the Spirit of the Present Evil Age.  It is the prayer of Joe, invoking the power of the Age to Come, that defeats the power of Willy. Joe’s servant heart makes him, alone of all the passengers, both a ready target for one who would label Christianity a “slave morality” and fertile ground into which God can plant His battle flag.  Joe’s faithful prayers inspire Connie’s sacrificial action of luring a fish with her diamond bracelet, the last of the crew’s “valuables”.

Faith in the one true God, trust in His power, followed by sacrificial action: “our victory assured though we walk through the valley of the shadow of death.”[ii]

Lifeboat shows all of us – rich and poor, democrat and totalitarian, meek and arrogant, male and female, black and white – in the same human boat, on the same dangerous sea, asking the same eternal questions. The boat holds the would be disciples, as an earlier boat held Jesus’ first apostles. The boat serves as the forum for a cinematic parable as an earlier one did for the Master’s sermons to the multitudes. And, in His power, the boat will survive the storms of fascist totalitarianism as Christ’s boat survived the storms of Galilee.  To paraphrase N.T. Wright we, like Joe, are called to sail between the cross and resurrection on the one hand and the full Kingdom of God on the other. We are called to bring the two together in prayer, holiness and action within the Present Evil Age.[iii]

Michael Horton notes that most of us “do not know what to do with sin, evil, and death in this culture, but by suppressing the question we deprive people of the comfort that comes from the answer.”[iv]

With Lifeboat, the devout Roman Catholic Alfred Hitchcock puts the question front and center and proclaims God’s answer in a great work of cinema.

Like Loading...
June 29, 2012 – 5:06 am | By Paul Kuritz | Posted in History, Men and Women, Movies, The Gospel of the Kingdom, Theology, Uncategorized, World Affairs | Comments Off on LIFEBOAT: Alfred Hitchcock’s Parable of the Strong Man