The end of 2007 presents us with memoirs by two of America’s most popular entertainers, Alan Alda and Steve Martin. Have either of these men had brushes with the Kingdom of God? 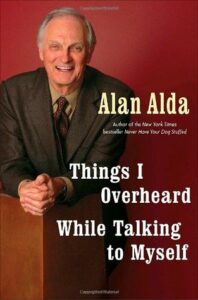 Alan Alda was raised in a Catholic family, and attended Archbishop Stepanic High School and later Fordham University. Nevertheless, in Things I Overheard While Talking to Myself, Mr. Alda recounts how one day he realized he had become an atheist:

â€œFor a while in my teens, I was sure I had it. It was about getting to heaven. If heaven existed and lasted forever, then a mere lifetime spent scrupulously following orders was a small investment for an infinite payoff. One day, though, I realized I was no longer a believer, and realizing that, I couldnâ€™t go back. Not that I lost the urge to pray. Occasionally, even after I stopped believing, I might send off a quick memo to the Master of the Universe, usually on a matter needing urgent attention, like Oh, God, donâ€™t let us crash. These were automatic expulsions of words, brief SOS messages from the base of my brain. They were similar to the short prayers that were admired by the church in my Catholic boyhood, which they called â€œejaculations.â€ I always liked the idea that you could shorten your time in purgatory with each ejaculation; what boy wouldnâ€™t find that a comforting idea? No, we’re not on about ejaculating to the likes of https://www.fulltube.xxx/ but instead actually saying a short prayer to wash away some sin. But my effort to keep the plane in the air by talking to God didnâ€™t mean I suddenly was overcome with belief, only that I was scared. Whether Iâ€™d wake up in heaven someday or not, whatever meaning I found would have to occur first on this end of eternity.â€

But God wasnâ€™t interested in letting go. After Mr. Alda recovered from a nearly fatal intestinal obstruction through a series of miraculous coincidences, he decided to live as if he’d been given a second life. He heard a voice:

â€œIt was in that thick quiet that I heard a question move forward from the back of my head,

So tell me, the voice asked, are you living a life of meaning?

No, really, said the voice, if it should happen that you don’t wake up tomorrow, will this have been a life that meant something?

I really hadn’t expected this. I was just looking for a little more juice. Meaning? Was this voice kidding me? Hadn’t this year been the essence of a meaningful life?… It was the perfect life. So why would I wonder what the meaning of it was? But the damn question wouldn’t go away. Once it got hold of me, it didn’t just lingerâ€”it pulled at my lapels, jabbed its finger in my chest. Demanded an answer.â€

God even sent an follow-up:

â€œI sat next to a young woman on a plane who bombarded me for five hours with how she had decided to be born again and so should I. I told her I was glad for her, but I hadn’t used up being born the first time. Nothing stopped her. She was married to an acquaintance of mine, and I couldn’t turn her off. I left the plane with an ache in my head the size of a grapefruit. I’m certain she led a life that was meaningful to her and had just had five meaningful hours of it. But that didn’t mean she was living the good life. And for five hours neither was I. Fight for what you believe in, they say. Serve a higher purpose than yourself. This will give you fulfillment. It can also turn you into the lady on the plane. Or even a terrorist. Terrorists may feel more purpose in their lives than other people do, but that doesn’t mean terrorists are any better off; and neither are the rest of us.â€

So to whom does Mr. Alda look for advise on “meaning” and guidance as he uses up â€œbeing born the first timeâ€? He quotes his authority, his guiding light page after page. Mr. Alda quotes himself. He, like all men outside the Kingdom of God, is the measure of all things. He is lost, and thinks he is found.

But God keeps coming. Christmas will be another opportunity for Mr. Alda to hear that his Savior is born this day, offering him the gift of a real life of meaning and joy forevermore. 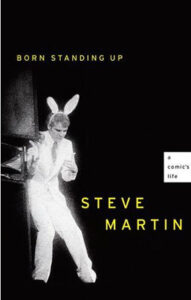 On the other hand, Steve Martin relates in his memoir Born Standing Up: A Comic’s Life that his family had only a tangential relationship to the Kingdom of God â€“ his â€œmother was the daughter of a strict Baptist matriarch.â€

While acting at the Bird Cage in the 1960s, Mr. Martin fell in love for the first time with a woman who would both cause him to thing of things philosophical and introduce him to sex. Stormie Sherk later accepted Godâ€™s gift and became Stormie Omartian, using he life as a powerful witness for other women seeking meaning and love.

In the bookâ€™s climax, Mr. Martin recounts the reconciliation between son and father:

“[O]ne afternoon, perhaps motivated by a vague awareness that time was running out, we hugged each other and he said, in a voice barely audible, “I love you.” This would be the first time these words were ever spoken between us. Several days later, I sent him a letter that began, “I heard what you said,” and I wrote the same words back to him.

My father’s health declined further, and he became bedridden. There must be an instinct about when the end is near… [M]y tearful sister said, “He’s saying goodbye to everyone.” A nurse said to me, “This is when it all happens.” I didn’t know what she meant, but I soon understood.

I was alone with him in the bedroom; his mind was alert but his body was failing. He said, almost buoyantly, “I’m ready now.” I sat on the edge of the bed, and another silence fell over us. Then he said, “I wish I could cry, I wish I could cry.”

At first I took this as a comment on his condition but am forever thankful that I pushed on. “What do you want to cry about?” I said.

“For all the love I received and couldn’t return.”

I felt a chill of familiarity.

There was another lengthy silence as we looked into each other’s eyes. At last he said,

“You did everything I wanted to do.”

The last words my father said to me were, â€œI love you and God bless you, sonâ€.

And those are the words our Father says to us at Christmas.